Congress: No Bailout for Puerto Rico

Congress is edging closer to granting Chapter 9 bankruptcy protection to Puerto Rico, a move that would allow the island to walk away from $164 billion in debt.

But this would shortchange millions of seniors, pensioners and other investors who placed their faith – and life savings – in Puerto Rican bonds, only to now see island’s government try to shirk its obligations. 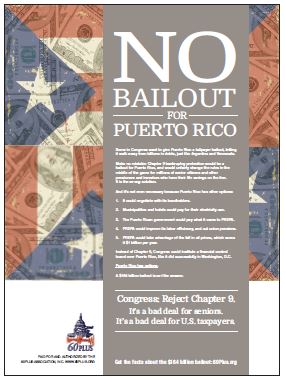 The effort to pass Chapter 9 legislation for Puerto Rico is being undertaken by the House Judiciary Committee.

The ‘Pierluisi-Garcia Padilla Plan’ allows Puerto Rico to walk away from its debts:

Resident Commissioner Pedro Pierluisi and Governor Alejandro Garcia Padilla have teamed up to essentially extort Congress, claiming that Puerto Rico will need a $164 billion bailout from Washington if Chapter 9 protection is not granted to the island. But it is hard to take serious the claims of Puerto Rico’s political leadership given its recent track record:

Congress is being told that Puerto Rico is out of options and will need a bailout if Chapter 9 is not granted.  This is false choice.  Puerto Rico has options and solutions.

Chapter 9 will have far reaching adverse effects on senior citizens and other pensioners and investors and taxpayers.  Ultimately, Chapter 9 will not address these problems and others, such as concern about the rule of law, sanctity of contracts and the need for greater financial accountability.  Puerto Rico needs long-term reform, and federal oversight mandated by Congress is central to any solution.