My name is Jim Martin. I am Chairman and President of the 60 Plus Association, an organization I founded in 1992 to give seniors another voice in the nation’s Capitol. [www.60Plus.org]

60 Plus counts some 7 million seniors among our supporters. 60 Plus is a conservative, right of center organization, as opposed to the AARP, an organization clearly to the left of center.

We also consider ourselves representative of an important consumer group, complementary to but different from, the regulated industries this proposed EPA rule focuses upon primarily. We invite EPA to give more concerted attention to this vitally important consumer perspective of the unintended consequences of the Renewable Fuel Standards. (RFS) They do impact prices for seniors, many of whom are on fixed incomes and dependent on social security. Price fluctuations due to the RFS program affects them disproportionately from the rest of the population.

I firmly believe that the Renewable Fuel Standard is a failed policy that has distorted the free market. There are several disadvantages with mandating higher ethanol blends in gasoline. According to extensive testing by the auto and oil industries, higher than 10% ethanol blends, such as E15, could damage millions of vehicles and void warranties. The Congressional Budget office says consumer gas prices could increase by up to 26 cents per gallon unless the EPA lowers RFS mandates. This will surely adversely impact seniors living on fixed incomes.

Also, it is known that if you use more ethanol that what is already in the mix it can cause major issues for consumers such as loss of mileage, storage issues and a tendency for ethanol to corrode plastic and fiberglass tanks and parts.

It should also be noted that rising food prices are a clear consequence of using more and more corn in ethanol.

We at 60 Plus support changes in the proposed rule that reduce volume targets for renewable fuels. The target reductions effectively reduce the obligated compliance that regulated parties subject to the RFS program must meet.

We believe this step moves in the direction of eliminating the program. We support elimination of this particular program.

While we understand that elimination cannot be accomplished overnight without unnecessary disruptions– we think this early rulemaking in the new Administration’s experiences presents an opportunity to revisit the assumptions underpinning the program’s creation and continuation in the past two Administrations.

The repeatedly changing regulations are burdensome and increasingly obsolete.
The two primary purposes of the RFS program were to reduce CO 2 emissions and increase fuel supplies. To be generous, the results have been underwhelming. The environmental benefits from so-called “Green fuels” are practically non-existent.
The 60 Plus Association commented on the EPA Clean Power Rule in December of 2014. [See attachment] Our comments then regarding the flaws of that rulemaking are applicable to this rulemaking. They include reference to a study we commissioned that documents the costs of rising utility rates for seniors. The same can be said for food prices.

We observed then the life threatening implications of rising power costs to seniors in light of EPA’s War on Coal manifest in the Clean Power Rule.

We also commented upon the overarching reality that the Federal Regulatory process was broken. We explained why.

It is still broken. The opportunity before us is to fix it by not repeating the mistakes of the past. 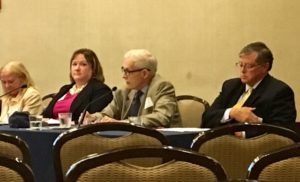 My name is Bob Coakley. I am a Board member and Secretary to the 60 Plus Association. My comments complement those of the Association’s President and Chairman, Jim Martin.

This rulemaking presents an opportunity to rethink the assumptions underpinning the RFS program as a means to accomplish clean air and energy independence objectives.

Let me reiterate the 60 Plus’ position that the subsidization and market distortion aspects of program should be phased out.

My perspective derives from three experiences:
(1) Representing the interests of senior citizens as a member of 60 Plus Association, particularly as consumers. I am a baby boomer well over 60.

(2) As a Congressional staff person for over two decades. In that capacity I worked with the drafters of the Small Business Regulatory Enforcement Act of 1996 (SBREFA) which contained amendments to the Regulatory Flexibility Act (RFA) and enactment of the Congressional Review Act (CRA). I was instrumental in the passage of the 1995 Paperwork Reduction Act, (PRA). All four of these legislative Acts have applicability to this rulemaking.

(3) As a partner to PolyGen Energy LLC, a startup technology development company engaged in developing technologies associated with the bio-refinery of biomass.

• The RFS programs’ unintended consequences include raising food prices for seniors on fixed incomes and increasing gasoline prices due to its operation. These unintended consequences on the tens of millions of low income seniors dependent on social security are not addressed.
Prior to the past elections 60 Plus observed the federal regulatory process is broken. It remains broken.
Steps underway, of which this rulemaking is one, provide corrective measures. More attention needs to be given to the procedural requirements, both statutory and via Executive Orders to further these measures.

Worth noting and considering is that the scope of the CRA, to which this Congress and the Administration has given priority attention, can apply to proposed rulemaking as well as final rules if the Congress so chooses. Previous comments by EPA Counsel to the GAO notwithstanding.

Executive Order 12866 Regulatory Planning and Review and the related Executive Order 13563 have not as yet been rescinded by the new Administration.
• This rulemaking does not comport with the mandates of the E.O. which include the Agency consider whether alternatives to the rulemaking obviate the need for it; and that agencies follow the requirements of law contained in the PRA, RFA, and Administrative Procedures Act.
• EPA does not reflect consideration of whether there is a need for the RFS program.
• EPA’s assertion that “this action does not impose any new information burden” with the implication that its responsibilities under the PRA have not been engaged is in error and violates the law.
• EPA certification that the action will not have a significant economic impact on a substantial number of small entities under the RFA is in error.
EPA’s continues its policy refusal to take seriously or abide by the RFA certification requirements amended bipartisanly in 1996. Reversal of this policy are in the best interests of our Country and small businesses.

Lastly, consider whether the RFS program is operating more as an obstacle to technology innovation rather than an incentive. As a business person engaged in the field of bio-refineries and the underpinning exponential technologies under development, I suggest it is an important consideration. Moore’s law and the speed at which it operates is applicable to bio-refining and renewable fuels.