LAWMAKER LAUDED FOR COMMITMENT TO ELDERLY 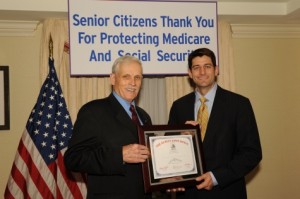 Washington, D.C. – Because of his commitment to the elderly, Congressman Paul Ryan (R-WI), has earned the coveted Guardian of Seniors’ Rights award from the 60 Plus Association, a national non-partisan organization advocating lower taxes and an adherence to the Constitution.

Now in its 20th year, 60 Plus presents Guardian awards each Congress to Democrats and Republicans alike based on their ‘pro-senior’ views and legislative initiatives.

60 Plus Chairman Jim Martin said, “we seniors felt we should show our gratitude to dedicated lawmakers like Paul Ryan, especially since as Chairman of the House Budget Committee, Mr. Ryan has come forth with a plan that is a long overdue first step toward saving Medicare for future retirees. Mr. Ryan shows compassion towards the elderly by pledging to 1) always protect Medicare, 2) always protect Social Security, and 3) just as importantly, to vote against wasteful spending of our tax dollars, excessive spending that has our government now borrowing over 40 cents of every dollar it needs to pay its bills. Seniors have to balance their budgets and so should our government.”

In an award ceremony in the nation’s capital, Martin cited Congressman Ryan for “his commitment to look out for America’s greatest generation as well as the Congressman’s promise to always work to preserve Medicare and Social Security for future retirees, our children and grandchildren. Maintaining the status quo for Medicare, as Mr. Ryan emphasizes, will not keep Medicare afloat.

“While both programs are running deficits, seniors are not to blame,” Martin emphasized. “After all, we seniors have paid into both all our working lives. We’ve paid our dues but seniors know why deficits face both Medicare and Social Security. For example, Congress raids the annual surpluses from Social Security to pay for other government programs, leaving nothing but trillions of dollars of IOUs.

“Seniors know this. Many of us are well aware of the famous quote from two U. S. Senators, the late Republican, John Heinz of Pennsylvania and the recently retired Democrat, Fritz Hollings of South Carolina who called the annual raid on the Social Security Trust Fund ’embezzlement,’ robbing Peter to pay Paul.

“Thankfully it’s Members of Congress like Paul Ryan who show caring concern towards our senior population, the very ones who have sacrificed all these years and who now face uncertain retirements due to the impending bankruptcy of their entitlement programs.  Representative Ryan has also pledged to work hard to halt out of control spending of hard earned tax dollars in order to right our fiscal ship before it sinks from tons of heavy debt.

“On behalf of 7.l million seniors that 60 Plus looks to for support, seniors know you’re in our corner.  Congressman Ryan, you have earned our respect and our appreciation. 60 Plus thanks you.”